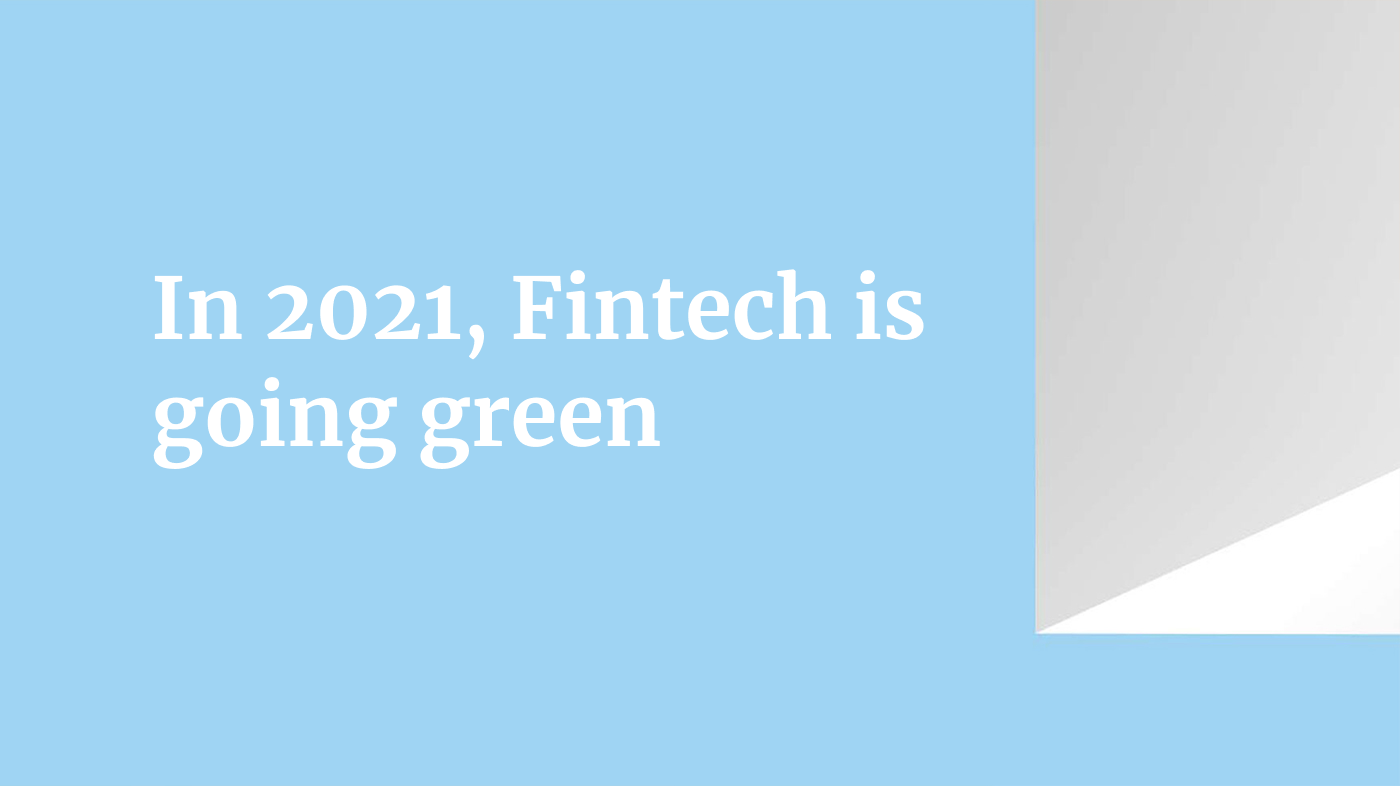 Fintech is one of the fastest-growing industries, and it has all the possibilities to revolutionize more than just the way we handle money. Maki’s Paavo Räisänen and Thomas Bacon discuss the latest trends in fintech and what type of fintech Maki’s on the lookout for.

As the Covid-19 crisis has sped up our farewell to cash, we’ve welcomed a plethora of different payment solutions to smoothen (Klarna-esque pun intended) our daily transactions. Traditional banking establishments are starting to have an ancient ring to them – or, as a16z’s Angela Strange says “every company will be a fintech company.”

Companies and consumers are less dependent on traditional banks and have more possibilities to provide and acquire their financial services from companies offering “infrastructure as a service”. Although their financial operations might become decentralized, companies and consumers are becoming less dependent on the sluggish and often restrictive services of banks.

In 2019, the global financial services market was valued at about $5504.13 billion, and is expected to grow at a 23.58% compound annual growth rate by 2025. A lot is happening in the field right now: earlier this month Stripe closed a $600 million round at a valuation of $95 billion, while Klarna raised $1 billion in new funding at a post-money valuation of $31 billion. Even though the finance sector is often characterized by tight regulation and dominated by prestigious banks with centuries of experience under their belts, companies raising impressive rounds are shaking the establishment to its core. Open banking, blockchain, crowdfunding, cardless payments, and AI platforms are all opening new opportunities in the financial sector that make it one of the most interesting fields to watch

The following four trends are areas within fintech that our Investment Director Paavo Räisänen and Investment Analyst Thomas Bacon believe will undergo the most interesting changes in 2021.

“It has been interesting to witness that fintech, a field that is often considered to appreciate hard values, is expressing an increasing interest in green alternatives and sustainability,” Räisänen says. Traditional affiliations are joining the sustainability movement, with large establishments such as Nordea announcing their plan to become a net-zero emissions bank by 2050.

Finnish fintech Enfuce from Maki’s portfolio launched My Carbon Action, a transaction-based lifestyle carbon footprint calculator, already back in 2019. Upon the launch, Enfuce CEO Monika Liikamaa stated that their goal was to raise consumers’ carbon consciousness by creating a product that gives individuals accurate feedback based on their purchase history and lifestyle. By combining their knowledge of modern payment technologies with the app’s consumer-focused approach, Enfuce is establishing its role as a multifaceted player in the field. And this hasn’t gone unnoticed: Enfuce announced their Tencent-led series B round earlier this month, worth seven million euros. According to Liikamaa one of the reasons the Chinese giant was interested in Enfuce is the impact they can make with My Carbon Action.

Bacon is interested in companies tackling growing generational wealth inequality: “For example rising housing prices in metropolitan areas are threatening homeownership and making it inaccessible for younger generations. Wealth is not equally distributed between races or genders either, and this is something that fintechs could help even out.”

Fintechs such as M-Pesa and IndiaStack are already known for helping people in East Africa and India send and receive money and make digital payments but their solutions are not completely problem-free: they’ve made gambling and taking easy credit simpler, also resulting in debt.

Perch Credit tackles social wealth inequality by helping their users in the US improve their credit score and thus increase their chances of securing an apartment, job, or other opportunities that are often linked with a high credit score. 81cents work on the same issue by supporting women and underrepresented minorities in career discussions and wage negotiations,, and their algorithm has helped their users increase their wages by 17 percent on average.

Fintechs based on algorithms, in general, have the potential to make fighting wealth inequality easier. But as with all AI, there’s always the risk of the algorithm growing biased towards certain types of users; if algorithms decide who gets a loan they may discriminate against other groups and favour others. Nevertheless, great opportunities lie within the socially inclusive fintech field.

In the not too distant future, Räisänen believes there’s plenty to do on the B2B side. Even though financial management has been in the process of digital transformation for quite some time now, many of the processes still are too labor-intensive.

“There’s room for solutions taking responsibility over repetitive tasks that are often completed by combining different legacy systems or may have temporarily been automatized using RPAn. Our portfolio company Strise’s clients say they’ve decreased the time spent on certain performances from hours to minutes using Strise’s data platform. Their customers include Danske Bank that just announced it will deploy Strise both to their AML and corporate advisor teams to automate repetitive work. It’s very likely that AI will similarly speed up processes all around the fintech field and its intersections with more traditional industries such as logistics,” Räisänen says.

...and the fintechs that aren’t fintechs at all

“I think we’re moving towards a system where any company will be able to offer some payment services themselves with the help of banking as service companies,” Bacon claims.

For example, companies like Enfuce offer a wide range of companies from banks and other fintechs to financial operators and merchants payment and open banking services and support them in introducing services of their own.

Bacon thinks the increasingly apparent benefit of decentralization of the financial process is extremely exciting. When he talks about decentralization he emphasizes that this doesn’t necessarily mean blockchain technology or other terms usually associated with decentralized finance 3.0.

“Companies have an opportunity to embed financial products into their offering, and there are a variety of different companies with a set of customer data that no one’s ever had before and with a remarkable level of granularity. Therefore, I think we’ll start to see more and more personalized financial products up and down the value chain,” Bacon explains.

According to Bacon, we can already see interesting movement like the Amazon partnership with Goldman Sachs that allows third parties to directly lend to the platform’s merchants, the Stripe treasury that allows platforms to embed banking services, the aforementioned Clearbanc news... these are all affecting the middle of the value chain. A little higher up are, for example, payroll fintechs and companies that have interesting data on their customers and can streamline payroll processes or offer payroll advance services.

“Most likely companies that have the best understanding and knowledge about their customers will be able to offer products which centralized financial institutions that we’re grown to know, like banks, can’t really compete with. That’s a really interesting transition we’ll start to see more of in 2021.”

*Are you working on a solution that has the potential to shake the fintech industry? If yes, don’t hesitate to let us know: lets@maki.vc. *