Why I’m betting on the long-term growth of esports 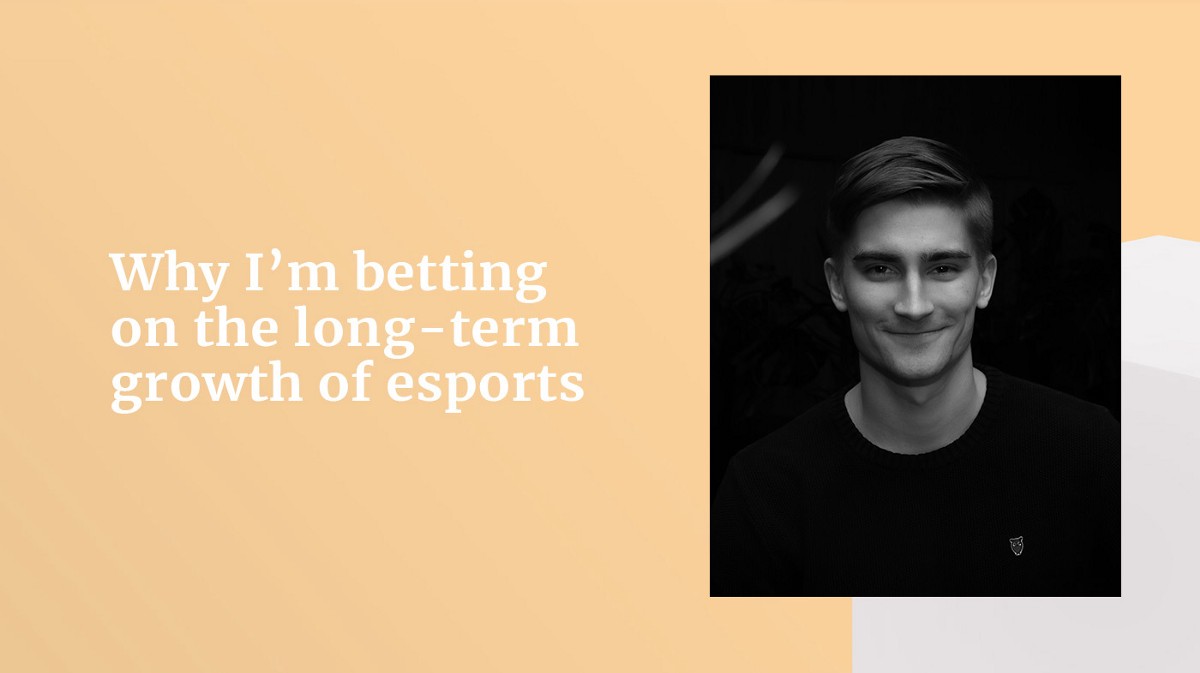 Miika Huttunen explores the five underlying drivers accelerating the growth of competitive gaming, and makes a compelling case for how esports teams and entrepreneurs are in fact playing the long game.

Miika Huttunen is the CEO of Slush, a global movement spanning a range of activities on a mission to create and help the next generation of groundbreaking entrepreneurs. First and foremost, however, he is an avid gamer who has followed esports actively since 2003.*

I still vividly remember the grand finale between NoA and SK Gaming, the first esports match I watched. The tournament was the then prestigious CPL Winter Championships 2003, held in Dallas. In order to watch the game, you had to find the correct server IP, connect to the game server as a spectator and wait for the match to start.

Fast-forward to 2020, I am sitting in Discord with my friends and watching the match between ENCE and mousesports. Instead of joining the server as a spectator, I co-experience the match with tens of thousands fans on Twitch including high-production value pre-game studio discussions, shoutcasters and in-game analysis.

Despite criticism over false viewership metrics, high valuations and allegations of unwarranted hype, esports has continued to grow steadily over the years. In 2019, esports revenues exceeded $1B, while the entire games industry has grown into a $150B business — growing up to 3.5 times faster than the global box office or the recorded music industry. Traditional sports organizations such as the Los Angeles Lakers and FC Barcelona have expanded to esports, while top-tier investors like Sequoia Capital have invested in esports teams. Despite the influx of capital, many sorely underestimate the long-term growth potential of esports. Here are five reasons why I think they shouldn’t:

1. COVID-19 is a chance to fill the void and gain momentum

During a time when hundreds of millions are experiencing social isolation, the ability to socialize through games and co-experience content becomes increasingly important. With traditional sports games on hold, esports tournaments can fill the void: multiple streaming platforms such as Twitch, Youtube, or Huya — China’s largest gaming streaming platform — have broken records with their average concurrent viewership reaching all-time highs.

What’s more, multiple sports leagues from the NBA to NFL and Europe’s F1 have looked to replace their paused season with digital-events. As written in a brilliant post by Matthew Ball, NASCAR, for example, replaced an entire race with 35 real-life NASCAR drivers strapped into simulator rigs playing a NASCAR video game. The event was broadcast on live linear TV, where it averaged close to a million viewers throughout the race and compiled more than 100M viewing minutes. Sports broadcaster ESPN also filled the gap left by sports by broadcasting 12 hours of esports on linear television.

While sports leagues will of course gradually reopen and tournaments eventually resume, traditional sports fans have over the months been guided to the world of competitive gaming — and for many of them, esports will have secured a permanent spot in their roster.

Esports is for today’s generation what traditional sports have been for generations in the past. While the average age of a traditional sports fan continues to rise, 79% of esports fans are still under 35 years old. In fact, in games like Roblox and Minecraft, the core demographic is between 9–15 years old. While these games are not esports titles, these players consume content and are more likely to follow competitive gaming as well.

According to Sports Business Journal, the average age of sports viewers has gone up in the past decade, with tennis being the only exception. This finding is exciting if we speculate how this trend will continue into the future: Tomi Kovanen, Senior Executive at Immortals Gaming Club, explains that by extrapolating this data, by 2036 the average sports fan would be a decade or two from average life expectancy in the US. Thus, while traditional sports are threatened by an ageing viewer population, esports viewership is only expected to grow when new generations are introduced to games through their parents. It seems that esports has one of the most potent growth drivers in its corner: time.

Esports is not digital first, it’s digital only — and that allows for unprecedented accessibility. While players certainly benefit from fast reflexes and finger dexterity, they don’t gain an edge from height, gender, flexibility, or other traditional physical advantages. Moreover, to watch or play games the viewer only needs a computer or a mobile device with an internet connection. There are already 4.57 billion active internet users and 2.5 billion gamers. As internet availability increases and the price of technology decreases, more and more viewers and players will be introduced to the world of esports.

While esports hasn’t quite figured out how to monetize the viewers properly, the viewing experience is also positively different to traditional sports. To watch traditional sports such as football or basketball, you need to pay a fairly expensive monthly or one-off fee to a cable provider crammed with advertising. In fact, already back in 2015, the average NFL game ran for three hours and 11 minutes and included 63 minutes of commercials, totaling 32.98% of the broadcast. These are challenging statistics for anyone who’s not extremely enthusiastic about American football to say the least.

Esports also has low initial entry barriers, as the most popular titles — games like Counter-Strike: Global Offensive, Dota 2, and Arena of Valor — are free to play. However, while you can fairly easily grasp what’s happening in either Formula 1 esports or Counter-Strike, inexperienced viewers can be overwhelmed by the gameplay of games like League of Legends, Starcraft 2 or Dota 2 — challenges no doubt faced by traditional sports fans, too.

The integration of live and on-demand video content in social networks, click of a button capturing in games, and different broadcasting tools have resulted in a surge in esports and gaming content consumption. Competitive gaming captures unique gameplay moments that are rapidly shared with the community, and these video-native products have the power to unlock unseen virality. As Andrew Chen, General Partner at Andreessen Horowitz, explains: “any product that automatically generates video when users engage will create more video sharing activity, [and] thus more viral acquisition and engagement.”

Video is already massive, and it’s only getting bigger. This plays in esports’ favour, as two of the top five Youtube channels with the most subscribers worldwide are gaming-related, and 48% of YouTube gamers say they spend more time watching gaming videos than playing games. People already consume content to feel a sense of community, to learn and mimic pro-gamer gameplay, or just for the fun of it — and esports teams are leveraging this like never before.

While it’s easy to capture and share in-game gameplay, some esports teams are taking it even further by producing content that effectively turns them into lifestyle brands. For example, US-based 100 Thieves has hired leading content creators for its “streamteam” that actively documents their pro teams and hosts talk shows on top of their own apparel collection. Teams-turned-lifestyle brands such as 100 Thieves demonstrate the power that esports brands and influencers have, and their ability to leverage user-generated content for turning curious viewers into tight-knit communities and lasting fan bases.

Instead of spending time at a shopping mall, teenagers use games as alternative places for social hangouts. The birth of Justin.TV with it’s (later Twitch) live-chat function, and voice communications tools like Discord have helped gaming evolve into an immensely social and interactive way of spending time across different time zones and borders. When the Co-Founder and CEO of Epic Games, Tim Sweeney was asked whether he sees Fortnite as a game, or as a platform, he replied that “Fortnite is a game but please ask that question again in 12 months.”

And it’s not only happening online — US-based, venture-backed PlayVS is building a platform for high school esports that reportedly has over 13,000 schools on the waitlist to build an esports program. For comparison, roughly 14,300 high schools in the US have a football program. On the other side of the world, Denmark’s Ministry of Culture launched their national esports strategy in 2019, signifying that games and esports are evolving into a culturally acceptable pastime and phenomena.

To avoid capital pull-backs and investor fatigue, the bar is high on esports teams to produce revenue and profits to justify current valuations. First and foremost, esports teams need to figure out a way to build their businesses so they are scalable and driven by recurring revenue streams. For startups building in this space, founders must think deeply about whether their business plans are aligned to scale as broadly as possible and whether they truly demonstrate understanding of market dynamics. There remain a lot of opportunities for building better voice communication, enhanced viewing experience, easing discovery, and developing analytics, anticheats, game design and hardware, to name a few — these opportunities, if seized appropriately, allow esports teams and companies to play the long game.

Miika Huttunen is the CEO of Slush, a global movement spanning a range of activities with a mission to create and help the next generation of groundbreaking entrepreneurs. He is the late-night in-game leader of amateur CS:GO team shelter.gg.