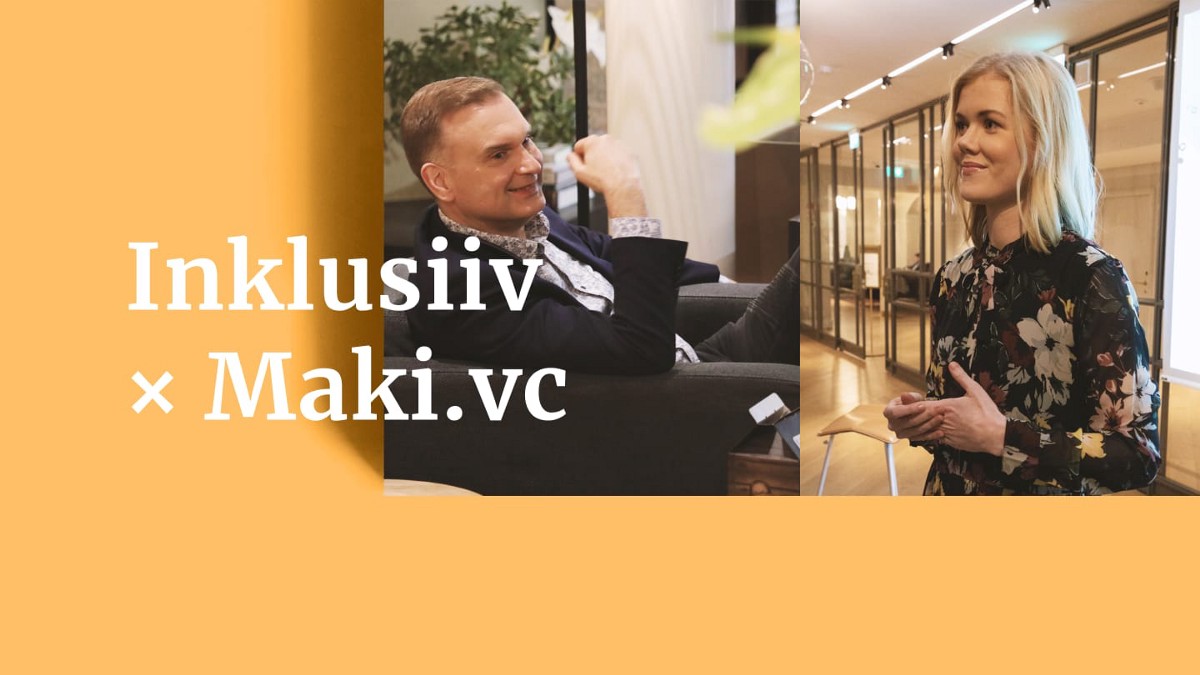 Last week diversity and inclusion non-profit Inklusiiv launched its first international initiative with top European VCs: Maki.vc, Atomico and Northzone were the first to join the initiative and commit to undergoing unconscious bias training. We caught up with Inklusiiv Founder Katja Toropainen and our Partner Ilkka Kivimäki to discuss what this new initiative aims for and why it should be on every investor’s agenda.

To start off, tell us about the challenge and why it was started.

Katja: There’s been talk about the state of diversity and inclusion in the European tech scene, but when you look at the numbers, it’s really a surprise that there isn’t much more talk. In 2018, 93% of all venture capital in Europe went to all-male founding teams, and the newly published 2019 figures weren’t much prettier — in fact, there was no change at all in this statistic. And these are just the figures for gender — we don’t even know the numbers for other dimensions of diversity such as age, educational background, ethnicity, sexual orientation and disabilities. We were shocked to study these numbers at Inklusiiv, and realized we needed to do something to address this imbalance. As a concrete first step, we decided to challenge every European VC firm to commit to advancing diversity and inclusion by undergoing unconscious bias training.

Surely the reasons behind these numbers being so heavily skewed are complex — so why the focus on VC firms?

Katja: VCs are in a unique place to impact diversity in the European tech scene — besides making critical investment decisions, VCs influence strategy through boardwork, support and mentor founders, help shape company culture, and influence recruitment decisions. They have the ability to impact diversity and inclusion, yet many don’t acknowledge — let alone make use of — this power. Currently less than half of European VCs have undergone diversity and inclusion training such as bias training, despite the fact that it could benefit their decision-making.

Ilkka: From a VC perspective, we recognize our responsibility in raising awareness and making sure that we don’t shut anyone out, but we also see this training as a business opportunity. Every VC’s priority should be finding and building the best possible teams — and we see this training as a concrete way of improving our ability of doing so.

Katja: I echo Ilkka’s concern — looking at the current indicators of the venture capital industry, I’m very worried about the amount of potential that is currently lost due to a lack of diversity. We can — and need to — do better.

Let’s dig into that a little deeper: Maki.vc was one of the first VC firms to join the initiative — why?

Ilkka: Like I said, for Maki.vc, it boils down to talent — we want to make sure that we have access to the best possible people. The European tech scene can’t afford to exclude any talent. We’ve all seen how alarming the numbers are and Inklusiiv has done a great job in highlighting the issue and raising it into public debate. We want to play our part and help bring the issue forward and of course, improve our own decision-making in the process.

Katja: Maki.vc was one of the first to support us in our first Finnish initiative and report their diversity numbers to us, so we’re of course glad that they were among the first to join. The support of Maki.vc, Atomico and Northzone sends a strong message to other VC firms and the European tech scene in general.

Ilkka: For our part, we appreciate working and sharing experiences with top VCs like Atomico and Northzone, and we had many good conversations at the launch last week. We understand the importance of having many spokespersons, so it isn’t enough for just, say, the women or the younger members of Maki House to talk about these issues — it has to be on everyone’s agenda, everyone has to commit to it.

Katja: I agree, that’s the next very much needed step!

Tell us about the actual bias training — why was it a part of the challenge, and what were your experiences with that?

Katja: The most important learning is that so many of our decisions in our daily life are unconscious, and that all of us are biased in our thinking. It’s our brain’s natural way of categorizing things in order to make quick decisions. While biases are nature’s way of saving us time, they can be harmful when we want to make rational decisions that are not based on pure instinct or experiences. We can never learn to tackle all of our biases, so that’s why it’s the most smart decision to have a diverse team. The training can be one of the first concrete steps on this path.

Ilkka: I can attest to that: the training was definitely an eye-opener, and it was also enlightening to share experiences with other members of our Maki team. Everyone in our team had at least one bias that they could identify based on the training. Personally, I found biases related to how I judge educational background — I tend to favor strong technical expertise, probably thanks to my own background.

Katja: It’s crazy how our biases can slowly develop — and as a woman it feels particularly bad knowing that there are studies showing that women are often biased against their own gender. It feels terrible, but it goes to show just how much the environment and society we live in affects us.

Looking back at the latest numbers, they still look rather grim. What are your next steps?

Katja: We hope that VC firms across Europe will embrace and accept the challenge, and we’ll definitely continue to monitor these and report the findings. Also, it’s worth keeping in mind that gender diversity is just the tip of the iceberg, and it’s clear that we need more data and awareness on other dimensions of diversity. Inklusiiv wants to advance both the study, knowledge sharing and awareness of these issues in Europe.

Ilkka: We’re pleased with our efforts to date although we still have a lot to do — despite our small size, our team has different genders, ages and educational backgrounds well represented, and our male / female -founder ratio is well above the national average at 26%. Naturally, there’s still work to be done — on our behalf, we’ll continue to work hard on making Maki.vc an inclusive firm from recruits to brand, communications and investment processes. And we’ll of course continue to support future initiatives like Inklusiiv’s.

Any last words for European investors reading this?

Katja: As I said in the challenge, VCs set the bar for how inclusive the European tech scene is — or isn’t. We need all of your support. We’ve all seen the numbers — now I hope that we can work together to change them for the better.