Are you VC fundable? Part 2: Product-Market-Fit 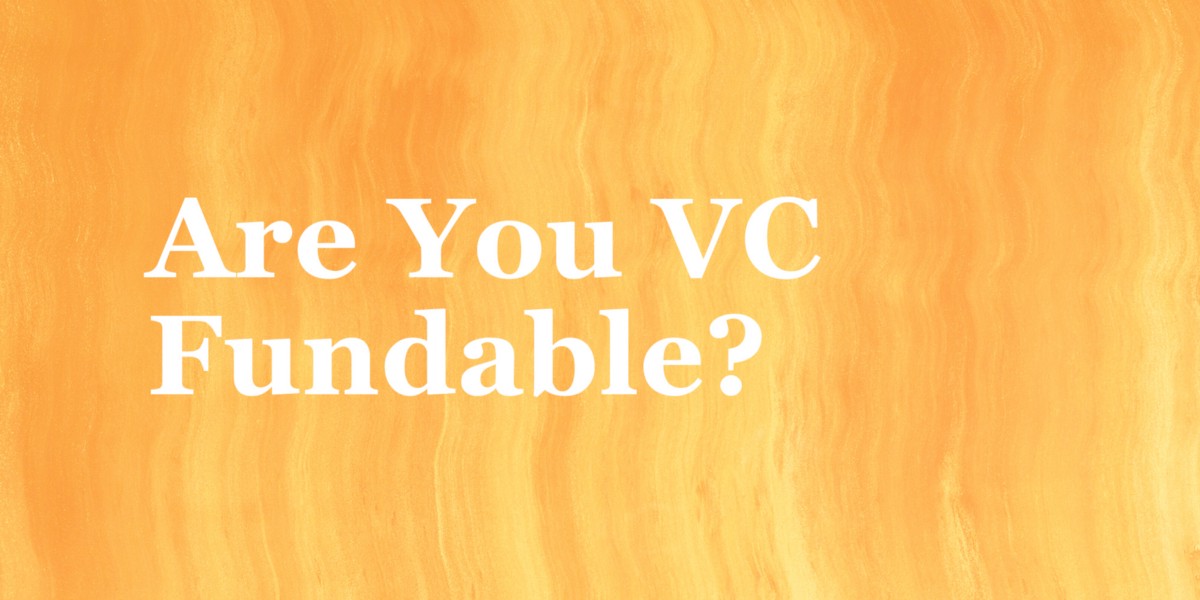 We started the “Are you VC fundable” series in order to demystify the funding logic of a VC. In the first part we delved into the fund math and scaling 1 on 1. Next, we’ll talk about the seemingly straightforward Product-Market-Fit that often remains as the stumbling block for a startup.

The one and only goal of a startup should be to solve a problem that others are ready to pay for — in the words of Marc Andreessen: “to be in a good market with a product that can satisfy that market”. The problem, its solution and the related market should be well defined before considering getting a VC on board. Product-Market-Fit as a concept seems relatively straight-forward — why would anyone ever build something that no one wants — yet, according to an analysis by CB Insights, the lack of market need is the reason why 42% of failed startups end up at the graveyard of good ideas.

Why is Product-Market-Fit so difficult to attain? Type it on Google and hit enter, and you’ll get thousands of pages written by people smarter than me, describing the concept and the process behind defining it. In any case, I’ll do my best to synthesize the main points of the ongoing conversation and to shed light on our specific thinking.

In Eric Ries’ The Lean Startup, the author defines a concept called Value Hypothesis. In Econ 101 it’s usually referred to as either Value Creation or Key Value Proposition, but the concept is the same: it articulates why a customer would consider trying and continuing to use your product. To us, this equals a Product-Market-Fit. We like to think that the Value Hypothesis is a balance between two parts: The Value your product creates to the customer, and the Effort required from your customers to start and continue using it. The age-old saying in the startup universe by Peter Thiel is that your product needs to be 10x better than what’s already out there, and when you anchor that to the idea of Value Hypothesis, you get to the idea that the Value needs to outbalance the Effort by a multiple of 10.

Let’s make one thing clear: growth does not equal Product-Market-Fit. Growth is easy to understand — web traffic, pilot projects or subscribers taking advantage of Limited Time Only -offers. It’s relatively easy to attract interest and gain traction, but it doesn’t yet indicate whether the product is able to carve out a space for itself in the customers’ minds in the long run. When you see the first signs of growth, it’s easy to start patting yourself on the back that you’ve found your sweet spot, but more often than not the initial growth is just temporary.

The majority of seed- and early-stage B2B-companies run on pilots, and pilots can be easily interpreted as a successful Product-Market-Fit. The pilots resonate most with innovators and early adopters, who get excited about new things and want to position themselves as thought leaders and barrier breakers within their industries. However, according to the legendary Geoffrey Moore, there’s a large gap — “The Chasm” — between those who are easily persuaded to test run innovations, and those who take a more pragmatic approach and don’t want to carry the risk of being too early in the game. To put it simply: when the early majority is convinced, only then the Product-Market-Fit has been proven.

Let’s look at the scale again that measures Product-Market-Fit. The innovators and early adopters are driven by things like curiosity and “visionary” reputation within the industry. They might be interested in testing things for a limited time and then building something on their own. The tech stack is often wide and relatively modern, enabling quick pilots with limited data sets. The organization supports innovation and has dedicated personnel or allocated time for the employees to specifically try out new things. The effort required from the customer is minimal, which tips the scale towards short-term value.

Once the pilot has been successfully completed, the startup finds itself standing on the edge of the chasm. The initial momentum gained from newness and excitement has worn off, and the customer properly begins to contemplate the actual value of the product and the required effort involved. This is where the needs and expectations of customers on both sides of the chasm converge. The effort in question can be anything from existing supplier relationships and long-term subscriptions with a competitor to organizational learning and just plain inertia. The initial momentum plateaus, the scale tips to the other side and the Product-Market-Fit looks something like this.

So, how do we cross the chasm? How do we make the scale tip back towards value? By doing two things: 1) losing the ego and 2) extending the product. I’ll explain in more detail.

Initial traction is addictive, and it’s the number one reason why entrepreneurs after experiencing the first high of positive customer feedback get stuck on their original idea and refuse to iterate. Entrepreneurs may feel that “the customer just doesn’t (yet) understand” and continue to feverishly sell more pilots to find the one customer that “gets it”. Others get discouraged and call it quits. This is often rooted in the misconception of the nature of Product-Market-Fit –something that is born in the mind of an isolated genius such as Steve Jobs who understands the human better than they do themselves. Yet the reality is much more complex than that. Only a few acknowledge the Apple Newton from 1993 and understand the 15+ years of iteration required before the first commercially viable iPhone hit the shelves.

After failed launches and trials, the successful founders admit that their idea in its current form is broken and that they need to change the direction and find a new approach. They seek criticism and learn from it. They’re not afraid of failure, as each rejection gives them valuable information on what the customers are ultimately after and how the product can be altered or enhanced to attend to the market’s needs. Each crack in the product or service identified by a customer or an investor is an opportunity to plug the holes and build something stronger and more durable. In the very early stages of building a company, the startup needs the market — not the other way around. Founders and teams that get stuck in their egos are unable to find Product-Market-Fit and are thus categorically not VC fundable.

The initial secret sauce of the startup might be a very specific thing — a feature, an algorithm, or a hardware component. This innovative element might be enough to excite the innovators and early adopters, but not enough to convince the mass markets. They want something that adds proven value, is simple to take into use, and easily sits in the customer organization’s tech stack. Even when the core component itself would theoretically bring significant cost efficiencies or productivity improvements, as an isolated feature it will be unable to do that.

Pilots are the main tool for early-stage companies to validate the value of the tech and to gather as much information on customer needs as possible. Based on that information, the company needs to build an extended product around the core defendable element to show how the product works and performs in an ideal setting. Let’s take a couple of examples. A company that manufactures AR glasses needs to create software and content relevant to the end customer to showcase the value of the hardware. A fintech company with a new payment platform needs to take over the tech integration with card providers and provide localized customer support services. A medical technology company with an algorithm for analyzing ultrasound images needs to provide integration to the existing hospital workflows, imaging devices and image analysis systems currently in use.

In the long term, many of these extended features may become obsolete or overtaken by others in the value chain. Yet the burden of proof when searching for Product-Market-Fit and mitigating any related effort lies with the company and doing that successfully requires showcasing the benefits of the tech as part of a whole product and exemplifying as quickly as possible where and how the value is generated.

What VCs look for

To conclude, finding Product-Market-Fit is difficult, and it’s crucial to understand that it’s not a constant but a variable that changes together with the market, competition and economy. At the very early stage of a company, the initial Product-Market-Fit should be tested, iterated and validated through a Minimum Viable Product. What is a Minimum Viable Product? We’ll get to that in the next part of the series.